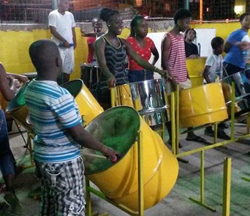 In December 2014 Con Brio Director Tom Northey travelled with the team from Global Grooves for a 2-week research and organisational development trip to Trinidad. This amazing experience offered new insights into music, culture and arts practice in communities in the UK and the Caribbean.

The City Sun Valley Steel Pan Group rehearse on a Wednesday evening in Sun Valley, a busy neighbourhood in Trinidad’s capital, Port of Spain. For many years, Sun Valley has struggled with a reputation for crime, gang activity and gun violence, particularly affecting its young people.

The group is a traditional youth Steel Pan Band – although in practice membership seems to range from a three -year old boy attending with his father, to several gentlemen well into their eighties. The majority of the players are teenagers, both girls and boys, who rehearse in their professionally-branded red and yellow T-Shirts.


And they are amazing. Their leader, internationally renowned steel pan musician Dane Gulston, counts them into a blistering set of tunes prepared for next year’s carnival and ‘Panorama’ competitions. The band are incredibly tight, with a driving percussion and bass section, harmonies from the mid-size pans, and the tune carried by smaller pans to the front. The sound is enormous. It spills out of the tin-roofed yard where they rehearse and bounces off the neighbouring apartment blocks.

We ask the band’s manager, Gerard Mendez, how local people feel about the noise. He tells us they’re just happy to see young people doing something positive in this community. “The neighbours would rather hear pans than guns, which is what they used to put up with’’.

Dane Gulston explains that Sun Valley has a steel pan heritage stretching back to the 1940s, and that one of the older gentlemen playing tonight is in fact the last remaining member of the original Sun Valley group. That band shut down decades ago, but Dane and Gerard decided to re-launch the group in 2007 as a direct response to the challenges faced by young people on the streets around the pan yard. Dane himself grew up in this community and went on to become one of Trinidad’s leading musicians. He wants to give something back.

It’s still early days for the City Sun Valley band, but the future looks promising. Membership is growing, and the Trinidadian government have responded to Dane Gulston’s inspirational energy by offering to build a new community facility for use by the band and other local groups. Sun Valley is gradually becoming recognised for its wealth of musicians, artists and other small creative businesses. Two policemen turn up half–way through the rehearsal, as part of a strategy to show the police’s support for community-led projects. The semi-automatic rifles slung over the officers’ shoulders give a reminder of the difficulties which persist outside the pan yard walls.

After giving us an opportunity to try playing the pans, Dane graciously thanks us for our visit. He hopes we can build future links and help promote the band’s reputation, so that the talents and hard work of these young players is acknowledged even more widely. It’s clear Dane sees the band as a way to give these young people the confidence, discipline and self-belief they’ll need to prosper, in whatever they do.

Before they leave, the young players chat and laugh with the older band members, enjoying a drink in the hot evening air. Several steel pan generations sit together, enjoying a shared passion for the sound and feeling of this unique music. One 16 year-old stays at his pan, practising again and again a particularly tricky phrase.

And then the rehearsal is over. The players head home, the lights go off, and the pan yard is once again no more than a concrete square, with a corrugated-tin roof, and a collection of 50-gallon oil drums.